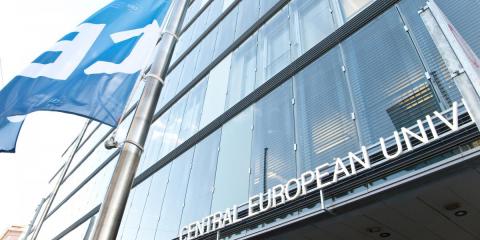 Developed in 2020 as a forceful response to the pandemic, the Philosophy Undergraduate Essay Competition, organized and hosted by CEU’s Philosophy Department, brings together undergraduate students from all over the world to think and write during a 90-minute on-the-spot essay writing event. Now in its second year, the competition will convene 100 participants from across the world for simultaneous writing on December 10, followed by a virtual café to debrief and meet each other. “It's one of those creative ways to come and work together even while we are physically isolated,” says Philosophy PhD student and co-organizer László Kőszeghy.

“I was surprised to learn that many undergraduate students have never had such an experience before. This is really the essence of doing philosophy - to express one’s thoughts and use one’s mind in a critical way,” comments Philosophy Professor and co-organizer Maria Kronfeldner regarding the inaugural competition last year. She further notes that the event is aligned with the department’s inclusive approach to philosophy, in that it teaches philosophy as an art of thinking committed to argumentative skills and values such as clarity, depth, and coherence rather than simple adherence to philosophical traditions. Such an orientation is incluse, she stresses, since it can encourage those brilliant young minds who did not have the luxury of being raised in an environment of endless scholarly reading. The pressure of needing to know more than 2000 years of tradition is often discouraging ‘first generation’ students from following their aptitude for philosophy. The essay competition is an opportunity to experience and enjoy philosophy without that pressure.

During the competition held via Zoom, students choose a prompt (a short quotation from a philosopher), identify a philosophical problem implicit in it, and write an essay explaining their coherent and well-argued position on the issue. Gold, Silver and Bronze medals are awarded for the most successful essays. In the case that the recipients then successfully apply to CEU Philosophy Department’s MA programs, the medals are accompanied by grants in the first year of studying at CEU.

“Last year, there was an overarching sense of accomplishment from participants during the post-competition virtual café – that it was a useful exercise in concentration. We also ended up having MA students come into the department who had participated last year,” adds Kőszeghy. Among the current Philosophy MA students who participated in the 2020 competition is Francisco (Frank) Hernandez who was born in Ciudad Juarez, Mexico and graduated with honors from the University of Texas at El Paso before coming to CEU. He highlights, “What I like most of the competition is that it forces you to come up with your own ideas. By having to write a paper in such a short period of time and with such limited resources, participants need to be creative and resilient; both qualities that are extremely important in philosophy.”

Philosophy Department Assistant Zsófia Jeney-Domingues is also among the event organizers and points out that the 100 participants slots filled up even faster than last year indicating an increasing appetite for the event, and that the global participation spans from Ghana, Turkey, Russia and China, to Argentina, Peru, the United States, Denmark, the United Kingdom, and back to Hungary and Austria, etc. To prepare students for the competition, CEU offered an essay writing workshop, led by Kőszeghy, in early December on the topics of how to analyze essay prompts, how to structure an essay and how to construct an argument.

Additionally, CEU MA and PhD students are among those participating as graders for the essay competition and have the opportunity to attend a workshop with Kronfeldner to learn evaluative skills, which further serve them in their own essay writing and capacity to give feedback to peers. “We want students who participate as graders to also benefit from this event, both academically and socially”, says Kőszeghy. The collaborative spirit of the event is a key to its success, the three organizers believe.

The Philosophy Undergraduate Essay Competition is also a way for students all over the world to get to know CEU, and welcomes students from all disciplines, not just philosophy. To connect participants, a virtual cafe immediately follows the writing providing a collective conversation to reflect on the experience. Learn more about the 2021 Philosophy Undergraduate Essay Competition here.