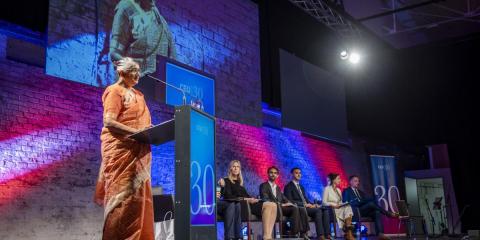 With the university in its 30th anniversary year, CEU welcomes a new President and Rector, Shalini Randeria. In her remarks, Randeria, CEU’s first woman President and Rector, and first leader from the global South, addressed the community: “Our founders had a unique vision of a university as an open society, one that would be truly international. 30 years later, CEU is a community of scholars from across the globe brought together by that shared vision.”

Randeria also shared the call of activist Stacey Abrams, with whom she was recently in conversation, reminding students that, “It isn’t sufficient to say you want the world to be better, you are obliged to do the work in every part of making that so.”

Master of Ceremonies Provost Liviu Matei opened the event, welcoming the audience of students, faculty, staff and guests. He emphasized that CEU is “Growing roots in Austria while remaining an international center for education, research and CEU community.” Provost Matei also announced the winners of several awards:

The 10th Annual European Award for Excellence in Teaching in the Social Sciences and Humanities accompanied by the prestigious Diener Prize was awarded to Maria Kaika, Professor of Urban, Regional and Environmental Planning at the University of Amsterdam. In her acceptance speech, she recognized the pivotal opportunities that free public education in Europe opened to her and others.

During the ceremony, MA student Abdullah Mirza from the Department of History welcomed those gathered, noting the significance of studying in Vienna and the capacity of using one’s mind, or what he called “pen power”, to fight for justice. MESPOM student Malek Al Jebaie followed by emphasizing social responsibility and commitment to future generations through collective responses to climate change and environmental degradation.

On behalf of the faculty, Professor Natalie Sebanz from the Department of Cognitive Science, additionally offered welcome remarks. Here she noted the importance of CEU’s diversity, exchange with students through teaching and learning, as well as moving through challenge together.