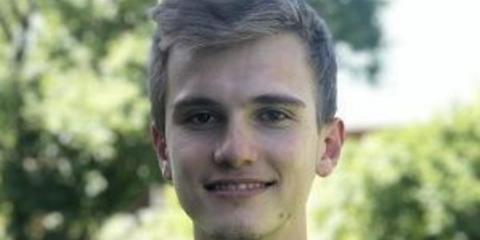 This fall, Philipp Steininger, originally from from Tschagguns, Austria, joined Central European University (CEU) to study as an undergraduate student in the Philosophy, Politics and Economics program. He is currently in Sharm el Sheikh, Egypt for the Conference of Parties (COP27) as one of two Austria UNFCCC Youth Delegates, organized through CliMates Austria. At 23, Steininger works in renewable energy communities and is involved in the climate justice movement, including Fridays For Future Vienna.

On the occasion of COP27, CEU spoke with Steininger during his participation in Egypt. This is an edited interview from November 4, 2022.

What is Austria's UNFCCC Youth Delegation and how did you become involved?

Austria's UNFCCC Youth Delegation program was developed by a youth led think and do tank called Climates Austria in Vienna. It is coordinated with the Ministry for Climate and the collaboration offers places for two young people every year to join the Austrian Delegation at the COP. The goal is to bring the voices of the youth to COP and also support critical, youth-led reporting of the negotiations to the population at home. Interested people between 18 and 26 years of age can usually apply in February or March for the two-year program. The first year those selected attend as the official youth delegates, which I am this year, and the next year you go to COP as the senior delegate. The second year delegates then mentor the new attendees. It ends up being a group of six people: two youth delegates, two senior delegates and two people supporting us with communications such as social media. Prior knowledge about climate change is helpful but not critical to apply.

What are your goals for participation at COP27?

I think it's a real privilege to be here, also with the understanding that those who are much more affected by the climate crisis cannot necessarily do so. Our main goal is to contribute to the efforts of the civil society to put pressure on the global leaders, especially of the North, to radically accelerate progress on climate action. This year, increasing climate finance contributions and acknowledgement of and finances for losses and damages induced by climate change are also heavily required and at the core of our demands. It's also very important for us to bring the voices and stories, particularly those from the Global South, to the Austrian population. People need to understand that the climate crisis is happening right now, that it is already taking peoples' lives. Last but not least we are eager to connect with young people from all over the world to learn from each other and join forces.

For those less familiar with COP27, what would you like to point out?

In general, COP is the international climate conference, which takes place every year around November for two weeks. Representatives from all over the world come together and negotiate about how to limit climate change, to reach the famous target from the Paris Agreement of 1.5 degrees, or at least well below 2 degrees of change compared to pre-industrial levels. Currently we are on a path to a 2.8 degree warmer earth by the end of this century.  This means climate induced migration of several hundred million people by loss of land and famines. This means tropical diseases within Europe. This means deadly heatwaves on an annual basis. So 1.5 degrees and thus preserving a liveable earth and saving millions of lives - that's what everyone on this planet should actually want to achieve.

In addition to the parties coming together, the civil society and the media are present and to report and influence the negotiations. It's a very complex convening and so many things are happening simultaneously. Right now I'm at the venue and the convening is in progress. A huge area has been built in the desert and people are working hard. The environment is quite busy, it can be quite loud and it's very diverse. I believe I am currently in the Green Zone which is accessible for all people with badges. It includes observers and it's a space for civil society participants. Then the Blue Zone is for the diplomats and is the area where the negotiations are underway.

What do you enjoy so far about being a student in CEU's undergraduate program?

At CEU I really like the small-scale of classes and the interactive dialogue. I also like the diversity of the class. We learn so much from both the teachers and other classmates since it’s so international. I was also positively surprised by all the events that CEU offers with really interesting guests. I think the most positive aspect is a sense that the teachers really care about and focus on the students and their studies.

Originally I thought I would go abroad for university and had applied for other courses similar to PPE. But during my years in Vienna I've been able to build up a network and deep personal relationships and I wanted to have access to and build up on that throughout my studies. By studying at CEU I can continue my civic engagement work from Vienna and study. The whole package was really attractive to me.

What drives you in your civic engagement work?

My mother is a very social being and she definitely played a crucial role in the development of my motivation to contribute to a more just society and a good life for all. Undoubtedly, this is not possible without a safe and stable climate. The climate crisis is really a question about life and death. As someone who has the access to the information regarding urgency of the climate crisis and the socio-economic background to be able to afford unpaid volunteering, I feel a clear responsibility to take action.