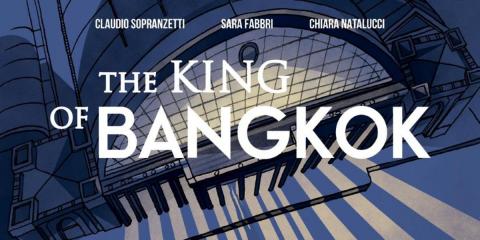 On January 25, the Association of American Publishers (AAP) announced the Category Winners for the 46th Annual PROSE Awards honoring scholarly works published in 2021, awarding CEU Associate Professor Claudio Sopranzetti’s book “The King of Bangkok” the winner in the category of Nonfiction Graphic Novels. Published by University of Toronto Press as part of their ethnoGRAPHIC series, and co-authored by Sara Fabbri, and Chiara Natalucci, the book is based on a decade of anthropological research.

“We are truly grateful for this award,” commented Sopranzetti, who teaches in CEU’s Department of Sociology and Social Anthopology, adding, “What makes us particularly happy is the recognition that serious academic work can and should explore new formats, not only as a way of disseminating research but also as a way of thinking and theorizing through different forms.”

The English translation of this best-selling graphic novel (which was previously published in Italian and Thai) tells the story of Nok, an old blind man who sells lottery tickets in Bangkok, as he decides to leave the city and return to his native village. Through reflections on contemporary Bangkok and flashbacks to his past, Nok reconstructs a journey through the slums of migrant workers, the rice fields of Isaan, the tourist villages of Ko Pha Ngan, and the Red Shirt protests of 2010.

Dr. Nigel Fletcher-Jones, Chief Judge of the PROSE Awards, added, “The standard of entries has been universally high. This led to very close competition in almost all subject areas...” The AAP panel of 24 judges reviewed more than 560 entries, in the process singling out 106 titles to be honored as finalists. From that list, the judges then identified 39 outstanding titles to be honored as Category Winners.

“The King of Bangkok” is a story of migration to the city, distant families in the countryside, economic development eroding the land, and violent political protest. Ultimately, it is a story about contemporary Thailand and how the waves of history lift, engulf, and crash against ordinary people.