The First Year: A Look at CEU’s Undergraduate Studies 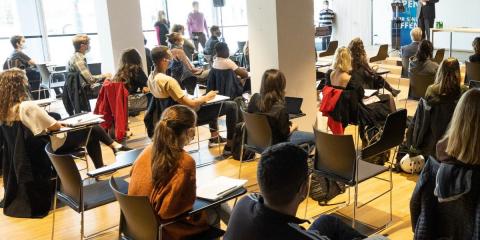 In the fall of 2020, Central European University (CEU) welcomed undergraduates for the first time as the university began its first academic year fully in Vienna. Inaugural cohorts in the BA programs in Culture, Politics and Society and Philosophy, Politics and Economics have recently completed year one, and beginning in the fall of 2021, a third BA course of studies in Quantitative Social Sciences will have its first class of students.

Reflecting on the distinctions of CEU’s multidisciplinary bachelor’s programs, Dean of Undergraduate Studies and Associate Professor Dorit Geva, highlights: “With all of the BA programs, we share the conviction that it's important to cultivate well-rounded students who are armed with the skills and knowledge needed to navigate twenty-first century challenges.”

“We live in a world now where knowledge is very contested and there's a lot of confusion around who produces knowledge and what knowledge we accept as legitimate,” notes Geva. “How do we think of sources? How do we think of legitimate forms of argumentation? What are standards of justification? We're all interested in these questions from our own respective research and disciplinary positions,” she adds, emphasizing that such inquiries are central to contemporary politics, going beyond academia.

Vera Riesz, who is enrolled in the Culture, Politics and Society program, notes that the small class sizes and ability to explore several topics in situ are cherished aspects of the experience thus far. Having recently turned 18, Riesz did not want to narrow her studies so early in her undergraduate education. “The setup of the program really worked for me. We got a class in each of the areas from which we can choose a major. I really like that we got insight into each of these topics, which has helped me clarify my direction.”

“Many of my friends are going to these huge universities and they don't really have much connection with the professors. I really like the fact that anytime I contacted faculty, I got a response back quickly. I felt like they listened to my opinion and that my insights were considered,” she adds. Riesz is currently applying to an internship and looks forward to experiencing Vienna more fully as the city re-opens. During her first year, she met close friends in the dorm, and has chosen to share a flat with one of those students as she enters year two. For Riesz, going to CEU is more than her studies; exploring and biking around Vienna is a lifestyle she enjoys.

Natasa Powell, a student in CEU’s Philosophy, Politics and Economics BA program, notes that CEU’s undergraduate studies felt different than other programs she considered from the start: “Even the application process was a good experience. In Hungary, schools only want your exam results and it's just numbers. At CEU, I was also asked for a CV, an essay and an interview. I felt like they weren't just accepting me because of my grades. It was more of a holistic assessment.”

Powell, who also appreciates the small class sizes, enjoys connecting the learnings of one class to another. “What we get from these classes is a way of thinking. They encourage critical thinking and having our own opinions,” she remarks, speaking of courses including “Comparative Politics” and “Knowledge and Reality”. She also mentions her class “Political Institutions” as one that made an impression, commenting, “I think we got a good basis for how politics work in different countries. It wasn't country-specific focused on just the US and Europe. We really learned a lot of examples from countries around the world. I also really enjoyed ‘Critical Reasoning’ because I do debate, so that was particularly relevant.”

Going into year two, Powell looks forward to sharing some classes with the Culture, Politics and Society students, becoming more active in the community and also to meeting the incoming cohort of BA students on campus in Vienna.

“All of our programs are oriented for students and young people with wide interests. They emphasize a multidisciplinary approach of studying topics from multiple angles. They also allow for choice,” comments Geva. “No two individuals will come out of the bachelor’s program having studied the exact same thing because you can tailor, to a certain degree, your course selection based on interest. That is something that we took from the American model and which we are very dedicated to in all three BAs.”

Another distinguishing aspect of CEU’s undergraduate studies is the fourth-year capstone project, which pulls together knowledge and skills that students will have accumulated during the four-year program. The capstone enables students to conduct individualized projects that can take different forms ranging, for example, from civic engagement and documentary, to podcasting and network mapping. This final project (which is part of the double accreditation as a joint Austrian and US degree), is a defining aspect of CEU’s programs going beyond the standard thesis required of most undergraduate BA programs in Europe.

With the addition of undergraduate studies at CEU, bachelor’s students are able to experience a rigorous, individualized and multidisciplinary education in an international environment. To learn more about the programs, visit here.