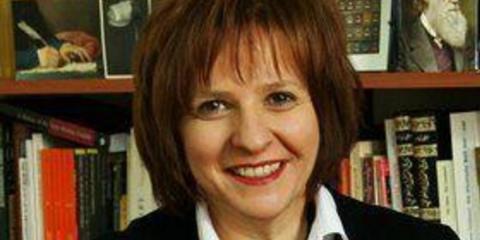 Institute for Advanced Studies at CEU (IAS CEU) Director and Department of History Professor Nadia Al-Bagdadi has been elected as Board Member of the International Advisory Board of the Consortium of Humanities Centers and Institutes (CHCI). CHCI is a global forum with some 260 member institutions that strengthens the work of humanities centers and institutes through advocacy, grant-making, and inclusive and interdisciplinary collaboration.

Al-Bagdadi joins Board members in providing intellectual leadership identifying emerging research areas, themes and opportunities for international collaborations across the continents. Operating globally, the ambition is to precipitate a transformative effect on scholarly inquiry and to launch discussions on major issues of public concern in the 21st century.

“As a consortium of humanities centers, a matter very high on the agenda which I intend to support is to clarify and defend the role of the humanities after the pandemic crisis. It is very clear that we're moving in a new direction where we emphasize, and may even prioritize, distance learning, artificial intelligence and digital technologies over conventional modes of research engagement and teaching,” comments Al-Bagdadi, whose research interests are anchored in Arab nineteenth century history, especially cultural and intellectual history, and its place in global history. She adds, “The humanities are about learning together through conversation and through exchange. With the new formats we put into question the very role of the humanities if we do not reflect and act upon the challenge.”

CHCI Board Members are selected both for their individual qualifications and with view to intellectual, regional, and institutional representation within the Consortium. Apart from their administrative responsibilities, which include oversight of CHCI finances, grants, staff, and meetings, members of the the Board are instrumental in advancing cross-institutional partnerships, recognizing regional humanities cultures and mobilizing the collective capacity of the humanities to engage current issues.

Nadia Al-Bagdadi  serves on a number of international, European, and national boards, committees, and research networks, like the German Research Council or the European Forum Alpach, to mention but two. And, of course, internally for CEU.

In addition to the position on the Board at CHCI, Al-Bagdadi was elected in 2018 President of the Network of European Institutes for Advanced Study (NETIAS). This provides an umbrella infrastructure for Europe’s Institutes for Advanced Study, and gleans and disseminates best practices among its members. Al-Bagdadi values the flexibility of the network and its ability to serve as a creative forum for feedback and development, which benefits the 25 or so participating institutes. For 10 years now, the Institute at CEU has been attracting outstanding scholars to Budapest from around the globe, including the Central- and Eastern European region, who spend each up to one academic year at CEU, conducting research and interacting with faculty.

With an eye on CEU’s two-campus situation, “I would like to re-establish the productive interactions that we had before the university’s move to Vienna, to offer spaces for unconventional and spontaneous gatherings of scholars with different backgrounds and diverse research directions,” notes Al-Bagdadi regarding priorities for IAS CEU in the coming years. “University-based yet autonomous IAS has developed during the last years into space for experimentation, for deepening existing fields and exploring new fields and research directions. The Institute, which invites fellows to pursue their diverse disciplinary interests in an environment conducive to focused scholarship, may benefit even more from CEU’s research - and vice versa.”

Cultivating the link between CEU and the Institute, which are now physically separated in Budapest and Vienna, thus constitutes a new challenge and will be placed in focus. According to the IAS CEU Director, the Institute continues and will continue to attract scholars coming from or with research  interest in Central and Eastern Europe, connected with scholarship and colleagues who are working on different regions and questions.

“How can we find ways to bring CEU scholars in conversation with the worlds that are emerging now as being leading intellectual forces - specifically East Asia? The Institute can play a role here and offer a nexus of scholarship coming from other parts of the world,” says Al-Bagdadi.

One particular asset of Institute, her Artist-in-Residence program, is up to further experiments, ideally expanding into other arts, too.  “You find new questions and maybe new answers through different tools, as an historian, a painter, a filmmaker or an analyst of films, so I think it is important to have the input of such artists and experts side by side,” she adds. She also maintains that by allowing different types of expertise to co-exist, opportunities arise for rethinking fields and exploring new directions of research. Therefore, hosting artists along with researchers is yet another way of advancing fields of knowledge.

To work on her own research and her book project, Al-Bagdadi will take sabbatical leave next year. The monograph deals with modern nineteenth century Arab intellectual history and  builds upon Al-Bagdadi’s intertwined research threads of cultural and intellectual transformations in the Middle East as in the Nahda movement (the Arab Renaissance), as well as the various actors, structures and relationships of Late Ottoman Modernity and Muslim Reformism in the Arab East.  Al-Bagdadi’s current  research includes the second phase of an international research project called Striking From the Margins: From Disintegration to Reconstitution of State and Religion in the Middle East funded by the Carnegie Corporation of New York, hosted by the Center for Religious Studies at CEU (September 2020 to August 2022). The collaborative project with a new team of researchers, which is co-directed by her, seeks to analyze, reset and extend research  around the resolution of state authority and religion in the Middle East. In particular, she is preparing an international conference in Tunisia and an edited volume on Remodelling the Body Politic: Gendering Transition in the Arab World, to be published, most likely, in the book series Gender and Islam at Bloomsbury [link?], of which Al-Bagdadi is one of the three editors.  Both the monograph project and Striking from the Margins project raise parallel questions, in different domains, about margins and center, about change and transition, about collective and self in the Arab world.

Returning to discussion of the humanities, Al-Bagdadi notes that she is open to change, change of formats of teaching and modes of intellectual encounters and research, but  would want thoughtfully to consider the impacts of the current moment on the acquisition and dissemination of learning. As communication is increasingly visual and disembodied, and “as the pandemic pushes us to do everything electronically - even instead of going to the library and reading a book, we now download it – we are experiencing real, perhaps major change. Whether this is a positive or negative development, is still to be seen. We need to look closely at changes taking place and indeed seize the moment to turn this collective experience into something valuable.”