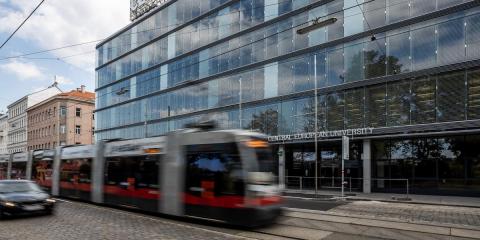 The complexity of many biological, social and technological systems stems from the richness of the interactions among their units. Over the past decades, a variety of complex systems have been successfully described as networks whose interacting pairs of nodes are connected by links. Yet, from human communications to chemical reactions and ecological systems, interactions can often occur in groups of three or more nodes and cannot be described simply in terms of dyads.

“Until recently little attention has been devoted to the higher-order architecture of real complex systems,” says Federico Battiston, Assistant Professor in CEU’s Department of Network and Data Science and coordinator of the project. However, a mounting body of evidence is showing that taking the higher-order structure of these systems into account can enhance our modeling capacities and help us understand and predict their dynamical behavior.

Battiston’s latest research, published in Nature Physics on October 4, benefited from the contributions of several international researchers, which included CEU’s Iacopo Iacopini and Tiago Peixoto, to lay the foundations for a physics of higher-order interactions in complex systems.

In models of social dynamics these abrupt transitions are very important, as they are reminiscent of critical mass phenomena. “Think of a cascade of rumors that can suddenly occur, but only when the first susceptible individual is surrounded by a sufficient fraction of agents which are already aware of such rumor. Otherwise nothing happens! These group interactions can only be formally described by using higher-order interactions,” highlights Battiston.

This development indicates significantly that higher-order interactions promise to be a fundamental tool for further theoretical development of network science in the future years.

Tiago P. Peixoto currently serves as the director of the BA QSS program.